“Secularity rather than secularism will help reach optimal freedom of religion”, said Prof. Cole Durham while delivering the 15th Dr. Asghar Ali Engineer Memorial Lecture at Jawahar Bhawan in Delhi on 22nd February, 2020. Prof. W. Cole Durham Jr. is Susa Young Gates University Professor of Law and Founding Director, International Center for Law and Religion Studies at Brigham Young University. The Lecture titled “Varieties of Secularism- A Comparative Perspective” was chaired by Tahir Mahmood, eminent jurist and former member of Law Commission of India and National Minorities Commission, currently also Professor of eminence, Institute of Advanced Legal Studies, Amity University.. The Lecture focused on varieties of secularism from a comparative perspective and essentially provided a framework to understand the different religion-state relationships vis a vis freedom of religion. The lecture juxtaposed secularity as a framework against secularism which is an ideology and argued that secularity promotes freedom of religion better than secularism in plural societies. The lecture was attended by over 100 people consisting of prominent scholars, journalists, students and activists.

Apart from the excellent scholarly analysis of the different models of religion-state relationships, Prof. Durham’s lecture was very beneficial since it helps in mapping a range of approaches so neatly explained by him in the “continua” which essentially represent a constant negotiation for space between religion and state having serious repercussions on freedom of religion. This delicate negotiation which is always in a state of flux is what the lecture explored with number of examples giving a very wide comparative perspective. The lecture was a fitting tribute to Dr. Asghar Ali Engineer since secularism and communal harmony were areas he dedicated his life to and at the very outset of his lecture, Prof. Durham recognizing the importance of religion in multi-religious and multi-cultural societies, explained that conception of the secular is inherently intertwined with the understanding of religion. Prof. Durham recollected Dr. Engineer’s thought where he expressed, “Indian plurality alone can be our valuable asset and religious response has to be based on tolerance, respect, and compassion for others. This globalized world cannot escape being religiously plural, secular and democratic.” Clearly, Dr. Asghar Ali Engineer did not see religion and tolerance as being mutually exclusive. Prof. Durham’s lecture also reflected this view and tried to explore the possible combinations or configurations to achieve a just framework for optimal freedom of religion.

At a time when there is a real global concern on shrinking scope of freedom of religion and the rise of far right ideology in many countries, it is debated if secularism is relevant today. Dr. Durham shed light on how it is possible to achieve freedom of religion in multicultural and pluralist societies. He made a distinction between secularism, a word so often used to denote separation of church and state, from secularity. Secularity he argued is a framework for respecting and including adherents of a wide variety of belief. Secularism in contrast is an ideology which prescribes that religion is consigned to the private sphere. This is a rigid ideology in a sense that it is akin to the French laicite advocating strict separation of state and religion to an extent that it envisages public sphere completely devoid of religion. This is restrictive of freedom of religion which demands more flexible and inclusive approach in the religion-state relationship. Prof. Durham cautioned that though secularism in principle concedes formal equality, it may not still achieve maximum freedom of religion.

Prof. Durham took the audience through these different types of religion-state structures beginning with theocratic state (which is on the positive identification end of the loop) where the linkage between the state and religion is so close that it is virtually impossible to distinguish state from religious rule. In a theocratic state, all branches of the government are subordinate to a religiously normative framework. Prof. Durham cited the examples of the Vatican City, Afghanistan, Bahrain, Brunei Darussalam, Iran, Maldives, Mauritania, Oman, Pakistan, Saudi Arabia and Yemen

Next type of state on the positive identification part of the continuum is established religions. In states having established religions, unlike in theocratic states, the state is not subordinate to the religion. The state does have an official religion but the state is not subordinated to the religion. There is a “symphony” of harmony between religion and state. Prof. Durham cited that Roman Catholicism has in the past been the state religion of a number countries where it was predominant—most notably Spain and Italy and various Latin American countries. Evangelical Lutheranism remains the state church in Norway, Denmark, and Iceland, and Sweden only recently disestablished its state Church (in 2000).

The next type of the state on the positive identification spectrum is religious status systems. In this type of a state, the state recognizes the jurisdiction of a number of religious systems, typically in areas dealing with family law and inheritance.  The legal system that applies typical depends on the religion of the individual. This state recognizes the autonomy of different religious communities and their right to administer their own religious law. A few states including those in Israel, India, Lebanon, and a number of Muslim countries have this type of system.

The above system was as explained by Prof. Durham is followed by endorsed religions. In this system, though there is no official or state religion, the state nonetheless acknowledges that a certain religion has a special place in the state’s history and tradition. This endorsement of a particular doesn’t necessarily translate into negation of freedom of religion vis-a vis other religions. This endorsement can take different forms- some merely nominal and others which are more integral to financial and political system of the state. Thailand and Sri Lanka endorse Buddhism for example. In another system called preferred sets of religions, not just one religion but multiple religions are favoured. Finland, for example, endorses both the Evangelical Lutheran Church of Finland and the Orthodox Church of Finland.

The next types of states moving away from the positive identification end of the loop and moving towards the middle is the cooperationist regimes. In this type, the state has a positive approach towards religion yet neutral stance towards religions. In a cooperationist state, there is substantial cooperation in church finance, religious education, various humanitarian services, and so forth, though at least in theory such aid is provided on a non-discriminatory basis. However there is a risk in this system is that the state might favour major religion in the state despite formally being neutral. Germany as pointed out by Prof. Durham is an example of the cooperationist regime. Ironically, Prof. Durham stated that though this type of system falls in the middle of the loop, this type of a state with its religion-state relationship offers maximum freedom of religion holding out a promise of substantive equality. Very close to the cooperationist regime stands the accommodationist regimes- seen both in allowing certain types of indirect financial and other support for different religions and in protecting the freedom to act in accordance with distinctive religious beliefs. This accommodation of religions can take different forms. This system too ensures freedom of religion.

The next in the loop of the identification continuum is separation. This spectrum moves towards negative identification continuum. The separation approach would desire a separation between the state and religion, in effect protecting one from the other. At the “benign neutrality” end, separation differs relatively little from accommodation, with more emphasis on rigorous separation of religious and state institutions, and is more categorical in disallowing state aid or support to religion.  Similarly, it is stricter in disallowing public display of religious symbols that can be construed to endorse religion. Less benign forms of separationism make stronger attempts to cordon off religion from public life. The dilemma in separationism is always how much space can be accorded to religion in the public sphere. In this separationist spectrum there are three types of states- laicite, secular control regimes and finally abolitionist states. Laicite, French model of separation, is at the rigid end of separationism. Secular control regimes aim to control and minimize the influence of religion in the state. There is a tight control over religion by state in secular control regimes. In abolitionist states, which are at the negative end of the identification continuum, have the overt goal of eliminating religion as a social factor.

The different types of states that Prof. Durham elaborated implied that there can be multiple ways that religion and public order may be related. In India itself, there have been the Gandhian and the Nehruvian models negotiating between religion and state. Gandhian model is characterized by a close connect between religion and state yet some distance. Nehruvian model on the other hand considered religion as entirely a private affair. The state should be neutral to all religions. But these liberal models are confronted and challenged by Hindu nationalism today which has an anti-secular agenda and seeks to restrict freedom of religion.

The lecture by a profound scholar such as Prof. Cole Durham with his complex and comprehensive schematization of the continua has been very timely to understand where India stands in the continuum of freedom of religion and the type of religion-state relationship it has. The lecture was instructive in understanding the intersection of these continua and what it implied for secularism in India and freedom of religion. This contribution and the overall lecture of Prof. Durham were well appreciated by the audience who asked informed questions to Prof. Durham. They were awed by the depth of Prof. Durham’s scholarship and his commitment to secularism which reflected in his very earnest presentation. 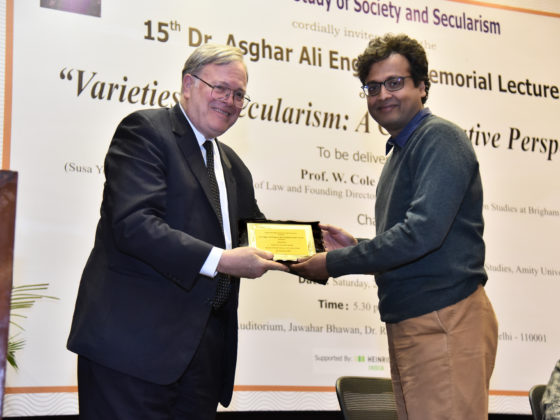