According to the DNA newspaper, a cross near Gaothan Road, Santacruz West was found desecrated and two vehicles were damaged on Wednesday morning, the 12th of April. A news portal AsiaNews.it stated that unknown criminals had desecrated a cross of Jesus Christ in Santacruz West in the local church by “decorating” it with a garland of slippers. Citing 85 major incidents of alleged persecution of Christians across 20 states last year, a report by a minority and human rights NGO says 2015 saw an unprecedented spike in “intolerance” against the community. (Gohain, 2016) A similar incident took place in Juhu last year in September, 2016 and this February in Kurla. This increasing violence against the community persuaded The Centre for Study of Society and Secularism (CSSS) which has been working for communal harmony in the country since 1993 to find out the facts of the incident that took place in Santacruz.

The members of the fact finding team were: 1) Suraj Nair, Program Coordinator, CSSS, and 2) Bodhika Darokar, presently interning with CSSS.

The team met the following people on visiting the site of the incident:

Rahul Dikshit who is a worker in a plastic company who visits Gaothan lane daily for his work;

Mary who works in Avenues Pvt. Ltd. opposite the corss;

Staff of Shivani Ethnic Girls’ Collection who did not want to be named.

Background: The East Indian Community in Santacruz West, near the Santacruz station who belong to Christian Catholic faith has been residing in the Gauthan Lane for many generations. According to them, they reside in their ancestral homes and they do not have any other native place. The members of the community are generally lower middle class. The younger generation works at call centers while others have small welding shops or give private tuitions to school children. Their houses are situated in narrow lanes. There are around 100 such ancestral houses with a population of about 300.  A grotto is built at the entrance of Gaothan lane which holds a steel cross of Jesus Christ and a statue of Mother Mary. Precisely opposite the grotto stands a private company named Avenues Pvt. Ltd. and the grotto also shares its wall with Raj Computer’s Academy. Also, there is a parking space for vehicles near the grotto next to which is a clothing store named Shivani Ethnic Girls’ Collection.

The incident being investigated took place during the Holy season of Lent, which is a period of 40 days before Easter when Christians fast and is considered a sacred period. The incidents as narrated in the FIR which the team managed to get a copy of is as follows:

According to the FIR lodged by Mildred Carlos, she had been residing in the Gauthan Lane for the last 21 years. She lived there with her husband and an 18 year old son. Her husband earned a living working as a welder. As was her daily routine, on 12th April too, she was passing by the grotto of Jesus Christ early in the morning at 7 am to go to Sacred Heart church. While passing by, she saw that someone had kept a footwear on the Holy Cross of Jesus Christ. She was scared and sat on the bench of the grotto for a while and then called Anna Gomes. She too saw the footwear on the cross and was scared. The two of them then, called the other community members.

One of the community members, Sherron Elaine D’souza, 36, told Mildred that the windshield of her Wagon R, with the number plate MH 02 BR 7403, had been smashed because she had a rosary hung on her rearview mirror. The windshield of Anna Gomes’ Maruti Swift too, with a number plate MH 04 CM 5061 had been smashed for the same reason. When Mildred Carlos, Anna Gomes and Sherron D’souza went on to check if any other car had been damaged, they realized that their cars were the only ones damaged because there was rosary of Jesus Christ hanging inside. The desecration of the cross of Jesus Christ with a footwear had hurt the sentiments of the community members and hence, they lodged the FIR.

On visiting the site, we saw blood stains on the bench of the grotto. We spoke to some community members and other people in the vicinity. When we met Mildred Carlos and Anna Gomes, we could get the following information. Anna Gomes had informed the Santacruz Police Station about the incident immediately. On their arrival, a constable straightaway threw the footwear away contrary to the standard operating procedure. Anna Gomes picked it up with a stick and kept it back in the grotto considering it to be an important piece of evidence. The constable almost as an afterthought put the footwear in a plastic bag with his bare hands possibly damaging the evidentiary value. The police inquired about other details and collected the CCTV footage from Avenues’ Pvt. Ltd. and Shivani Ethnic Girls’ Collection by afternoon. Mildred Carlos, Anna Gomes and a few others went to the police station to file an FIR.

Mary, a staff from Avenues Pvt. Ltd., and the staff of Shivani Ethnic Girls’ Collection both, confirmed that they had submitted the CCTV footage to the police and that they do not have a copy of it. Other shopkeepers around and community members said that such an incident had never occurred in the vicinity in the past and that this was the first time. The East Indian community members we talked to had no ill feelings or enmity towards any community or organization to whom the desecrator may be belonging to. They said that they wanted to simply be the peacemakers and live in harmony with everyone irrespective of their community or religion. Also, the community had no feeling of revenge in any form and did not wish to escalate the issue. They certainly sought justice but without a hullabaloo.

We then visited Santacruz Police Station for further details and facts about the incident. The Senior Inspector of the Police Station, Ashok Thube, had visited the site of the incident on that day. He told us that the man behind the act had confessed to have committed the offence. He was drunk during the incident. He threw stones in order to shoo away the barking dogs which accidently hit the windshields of the two cars. Also, the footwear that was kept on the cross belonged to the man accused. He seemed to imply that the act was not done out of religious motivations but because the accused was drunk. Inspector Thube did not quite answer the question as to why the accused kept a footwear on the cross at a height of little more than 6 feet, even if it belonged to him. On questioning about the blood stains on the benches of the grotto, Thube amusingly replied with a laugh that the blood stains were nothing unusual and that it was not a big deal. When we asked him about the description of the accused, he replied unsurely that his name was Shetty, he worked as a waiter and was drunk all day long. Thube did not seem to know the current status of the accused. When asked he replied that he “might be in jail or out on bail”. He claimed that this is an isolated case and that there was no communal angle to it.

The team after talking to all stake holders arrived at the following conclusions:

The following are the demands put forth by the CSSS team:

From Destruction of Wombs to Liberators of Muslim Women: Politics of Hindutva

Growing insecurity among Muslims may trigger reforms within the community 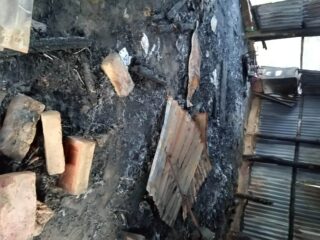 Communal Violence in Tripura: A Fact Finding Report of CSSS