India continued to be confronted with the menace of communal violence in the year 2016. The Centre for Study of Society and Secularism (CSSS) monitors communal violence tracking 5 newspapers in two languages – English and Urdu. Some newspaper reports were then cross checked with web portal TwoCircles.net. The newspapers monitored were Mumbai editions of The Times of India,The Indian Express, The Hindu, Inquilab and Sahafat.

Violence is a broad term which encompasses in its ambit communal attitudes or symbolic violence, structural violence and physical attacks resulting in injuries, deaths or loss of property. However, the present report is limited to physical violence wherein communal hatred motivates attacks on members of a community only on the basis of their religious identity. The report excludes primarily ethnic violence with communal overtones as, for instance, in Manipur. This report does not include inter-sect or inter denominational violence, for instance within the Muslim community in Kalyan between Barelvis and Salafis on 28th December.

Source: Statement referred to in reply to part (a to c) of Lok Sabha starred question N0. 35 for 19.07.2016. Showing number of communal incidents, persons killed/injured therein in 2016 (up to May)

For the sake of analysis in this study we refer only to the aforesaid newspapers and we compare it with newspaper reports of communal violence in 2015.

Comparison between number of Communal Violence Incidents, Deaths, Injuries and Persons Arrested in 2015 and 2016 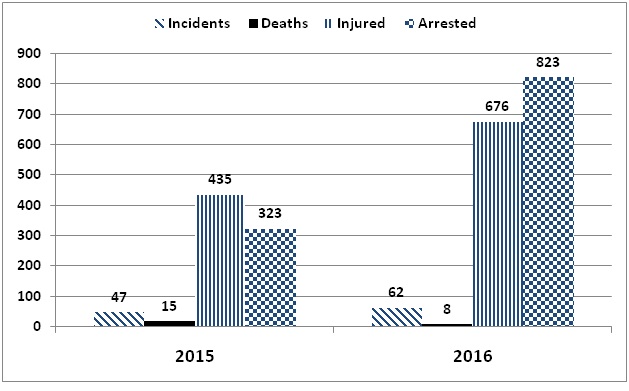 Highest incidents of communal violence in 2016 were reported from the poll bound state of Uttar Pradesh (18 out of 62 incidents), followed by Bihar (10), Maharashtra (8), Jharkhand (6) and Madhya Pradesh (5). These five states made up for nearly 76% of total incidents of violence reported in 2016.

State wise break up of number of communal incidents:

In 2016, Punjab witnessed communal violence for the first time after the Khalistan related extremism was neutralized. This time it was conflict between a section of Muslim and Hindu communities. The local Sikhs were in support of the Muslims.West Bengal is witnessing steady rise in communal violence after near riot free regime during the Left Front rule (24, 16 and 27 in the years 2013, 2014 and 2015 respectively according to Home Ministry data for those years).

Regime wise comparison of number of incidents of communal violence 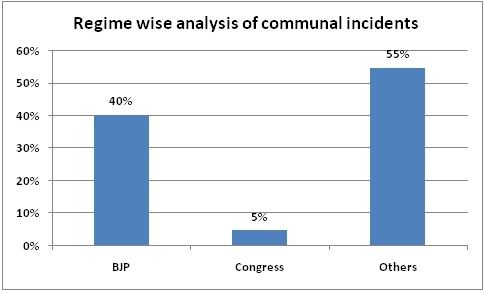 The response of the police during communal violence has been wanting. The police took preventive action only in 3 out of 62 incidents reported. The police failed to respond effectively in BJP as well as non BJP/Congress ruled states.

Uttar Pradesh is slated for Assembly elections in 2017. It has been generally observed by many social scientists that impending elections and political mobilization strategies tend to be along caste and communal fault lines contributing to communal polarization and communal violence.

Bihar has witnessed increasing incidents of communal violence after coalition of JD(U) and BJP split in 2013. Maharashtra which falls in the West zone has been always prone to communal riots.

Communal violence in 2016 claimed 8 lives. 7 out of the 8 deceased were Muslims and the community of the remaining one deceased was not specified.

Zone wise analysis shows that the North zone of the country has reported highest incidents of violence– 42 incidents were reported in the North zone. West zone reported 12 incidents, while South and East zone each reported 4 incidents. North zone includes Uttar Pradesh, Madhya Pradesh, Bihar, Jharkhand, Punjab and Rajasthan. The West zone consists of Maharashtra and Gujarat. The South zone comprises of states of Tamil Nadu and Karnataka while the East zone comprises of the states of West Bengal and Chhattisgarh. The North and West zone which is generally referred to as the cow belt for higher reverence of cows has traditionally been the hot site of communal violence.

A number of communal incidents took place because of the clash of Muharram and Durga Puja being on the same day. Stone pelting and tensions were experienced during the processions. Festivals and desecration of places of worship and sacred symbols were exploited to trigger communal violence. In Deoband, UP, locals found vandalised idols in a temple on 27thJuly. Suspect belonging to the Muslim community was caught and beaten up by locals before he was handed over to the police. Officers claimed Sadik appeared to be mentally-challenged. Though the gates of a religious structure of his community was found damaged late at night, police acted proactively and repaired the gates in the night itself and the situation was under control. In Shahabad, Karnataka, a youth called Shiva posted an inflammatory post on facebook against the Muslim community and was arrested for the same. Next day a Dussehra cut out was found desecrated. Rama Sene and VHP tried to exploit this incident to fan communal violence. The Muslims were being blamed for desecration and hurting the sentiments of the Hindus. This misinformation was spread to apparently secure the release of Shiva. Later it was found that some Hindu youth had desecrated the Dussehra cut off. The police arrested 5 Hindus and one Muslim in this case and prevented riots on a large scale.

Festival processions and Social Media were used as trigger events of communal violence.Social media posts triggered off 7 incidents of communal violence. Derogatory posts about Prophet Mohammad or Hindu Gods/Goddesses or other community were circulated on social media like facebook and whatsapp which triggered off violence. In one such instance in Sagar situated in Madhya Pradesh, a nephew of an RSS member was found guilty of posting objectionable post. One Muslim youth lost his life and 3 were injured in the violence that ensued in Ilambazar in West Bengal. 21 incidents took place during festivals of Durga puja, Muharrum, Ganpati procession, Hanuman jayanti and Eid-e- Miladun. Festival related incidents were reported highest in UP (8) followed by Bihar (4), Jharkhand (3), Maharashtra, West Bengal and Karnataka reporting two each.

Regime wise comparison of arrests, injuries and deaths of Hindus and Muslims 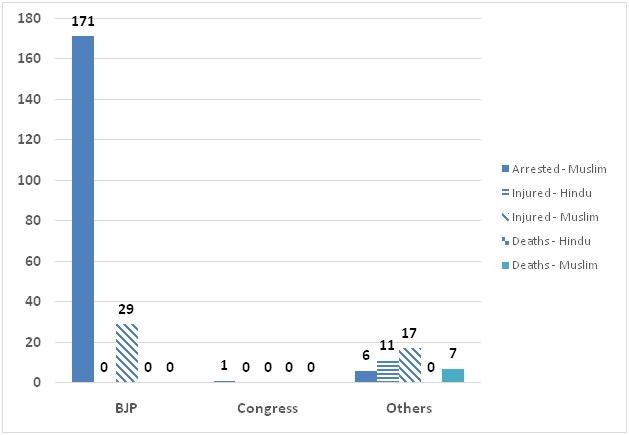 6 out of 12 states where communal violence was reported are under BJP rule, one under Congress and 5 under other parties. 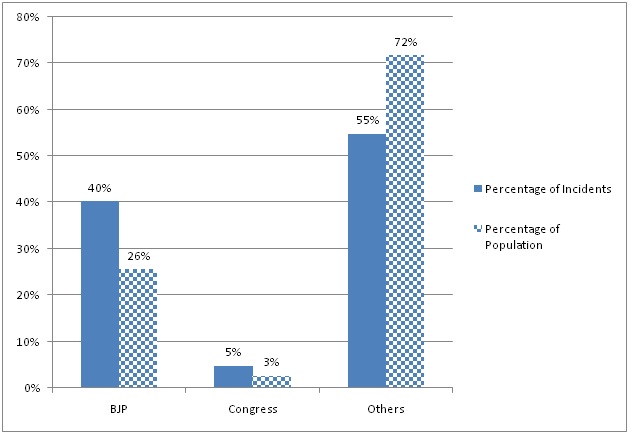 No. of states ruled by BJP, Congress and Others where incidents of communal violence took place 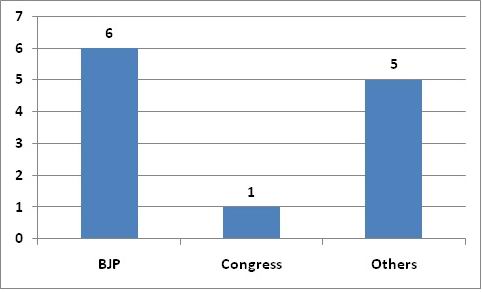 The Congress government in Karnataka was successful in preventing a riot in Shahabad where one Muslim and five Hindus were arrested (referred to above). In 2015, the media reported three incidents of communal violence in Karnataka and in 2016 also this number has remained the same suggesting no increase in the number of communal incidents.

How were riots dealt with?

Ruling regimes are able to exert tight control on the state police as they determine postings/ transfers and promotions of the police personnel. There is little incentive to the police to act independently and uphold law and order even when it goes against the political interests of the ruling party. The police action(or inaction) during riots is largely determined either by their own biases and prejudicial attitudes or due to political pressure exerted. It is important to examine the role of police at three different stages of communal violence – prevention, control during riots and post riot actions.We here examine the role of police at all three stages in BJP, Congress and non-BJP/non-Congress ruled states.

The police were able to prevent only 3 incidents of communal violence and all three states were ruled by non-BJP governed states (Bihar, Karnataka and UP).

Maharashtra police has also arrested the highest number of Muslims – 156 (Nandurbar 21, Umerkhed 63 and Malkapur 72)out of 179 Muslims arrested in all the communal riots.In Umerkhed for which religion wise disaggregated data is available, 25 Muslims were injured whereas no Hindus were killed or injured whereas 4 houses were attacked whose community is not specified.

Comparison between no. of arrested from Hindu and Muslim community from the three areas of Malkapur, Nandurbar and Umarkhed. 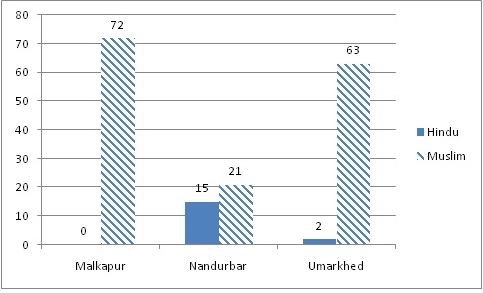 Comparison between no. of arrested and injured from Hindu and Muslim community in Umarkhed 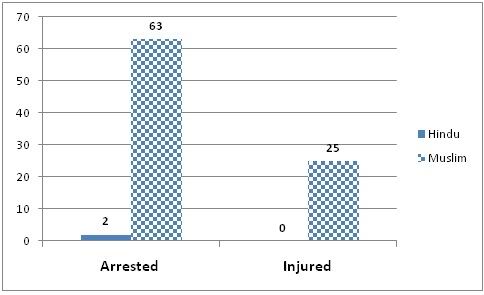 In Peda in Bijnore, the police though didn’t respond in a timely manner which allowed the communal violence to take place, the police later arrested 23 Hindus. National Security Act was invoked against the accused 2 accused. In other incidents too,UP Government has invoked draconian law – NSA. However that has not proved to be a deterrent as high number of communal violence persists. 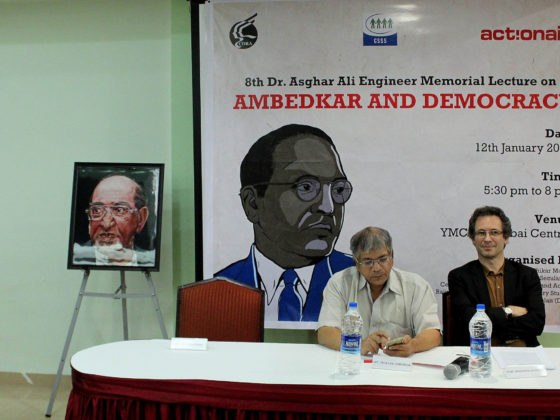 Mob lynching and its defenders