Dr. B.R Ambedkar arguably was one of the tallest Indian political thinkers in India. His contribution to building of modern India is momentous. Even today after decades of his demise, his thoughts inspire social struggles all over the country and his legacy is sought to be appropriated by different political ideologies. India is hailed as the largest democracy in the world and it is interesting to unravel what Ambedkar thought of democracy. In order to shed light on Ambedkar and his thoughts on democracy, 9th Dr. Asghar Ali Engineer memorial Lecture was organized on ‘Ambedkar and Democracy’ delivered by prominent scholar and writer, Christophe Jaffrelot on 12th January 2017 at Melville Hall, International House, YMCA, Mumbai. The memorial lecture was organized collectively by Action Aid, Centre for Study of Society and Secularism, Maharashtra Lok Adhikar Manch, Centre for Development Research and Action, Rajiv Gandhi Centre for Contemporary Studies and Dalit Advasi Adhikar Andolan. The lecture was attended by over 300 persons- students from various colleges of Mumbai including Tata Institute of Social Sciences, Mumbai University, SIES etc, academicians, prominent film makers, activists and writers. The massive turnout for the lecture took the organizers by surprise since they had to scramble to get extra chairs for almost half of the audience which was still on their feet. In spite of sitting on the floor or standing throughout the lecture, the audience hung on to every word spoken by the speaker in rapt attention and interest.

The lecture was inaugurated by Sandeep Chahhra who was the chief guest for the event. He contextualized the lecture and Ambedkar’s thought on democracy in the larger context of the global scenario. Democracy worldwide has to grapple with the tumults like Brexit and market economy on one hand and the question of equality and liberty on the other. There are social struggles around the world for social democracy characterized by equality and progress for all. Sandeep Chahra pointed out that mostly in popular democracy it is often debatable who progresses and if there is equality. In such critical debates, Ambedkar’s thought offers a grounded perspective.The Speaker, Christophe Jaffrelot took the audience through the ideas of Ambedkar, tracing his thoughts through the different stages of his life. Giving insights into democracy as Ambedkar saw it, Christophe pointed out the according to Ambedkar, Hinduism and democracy were antithetical to each other. This was primarily because Hinduism represents a graded hierarchy in a caste ridden society. The religion gives legitimacy to inequality and exploitation of the Dalits. Democracy as an emancipatory force is not compatible with Hinduism. That made him to arrive at his decision of conversion to Buddhism. Christophe Jaffrelot explained that though Ambedkar had his first brush with democratic values in the West while studying and pursuing academics, Ambedkar himself later goes on to clarify that he found an indigenous source of democracy in Buddhism. Ambedkar makes a clear distinction between Hinduism and Buddhism and doesn’t subsume Buddhism as part of Hinduism and thereby diluting its protest to brahminical values underlined by inequality.

Ambedkar was appointed on several posts of responsibilities from where he could formulate laws and policies in accordance to his vision of India and his understanding of Indian society and democracy. One of the greatest examples of this was the Indian Constitution. He was the chairperson of the Drafting Committee. His emphasis on individual rights reflects in the fundamental rights enshrined in the Constitution. He later goes on to be the Law Minister in Jawaharlal Nehru’s cabinet. As a law minister he is compelled to face his largest disillusionment in terms of the resistance to the Hindu Code Bill which some of the Congress members themselves rejected on account of the Bill being far reaching in its attempt to reform the Hindu society. This is where Ambedkar realized that democracy cannot sustain where it’s mere political tokenism and bereft of socio economic dimension. Though as a political regime (or form of government), democracy was an equalizer in terms of political rights, which according to Ambedkar wasn’t adequate for democracy to sustain. He pointed out to the preconditions required for democracy. That is socio economic democracy. If there is rampant inequality in the society in economic and social sphere, merely granting them political democracy will be meaningless. Democracy will be meaningful when and is capable to bring revolutionary changes by altering the socio economic status of the historically marginalized. When he realized that some elements in Congress were vehemently opposed to changing the socio economic order in the society he resigned and became disappointed in the Congress.

The speaker very lucidly elaborated on the thoughts of Ambedkar on democracy on four dimensions:

Whilst dealing with these four dimensions, Jaffrelot explains how Ambedkar shaped the different political ideals in India which makes him so relevant in contemporary debates. According to Ambedkar, democracy was needed to build a new India resting on equality. Hence his arguing in favor of universal franchise. Ambedkar journeyed in his own understanding and grappled with the question as to what would be the best form of representation to Dalits who have been historically oppressed. Ambedkar started with the demand of separate electorates for Dalits, later demanding for Dalits in village panchayats in 1933. In 1940s, he felt Dalits needed separate settlements and representation in judiciary and bureaucracy. Eventually when he becomes the chair of the drafting committee, he feels that in order to bring unity in different social groups equality is a necessity. The notions of minority and majority will not bring this unity.

Ambedkar believed that this equality can be brought about in the democracy. But like mentioned above, there was a palpable tension he was witnessing between political democracy and socio-economic democracy which he thought cannot be divorced from each other. Democracy is a mode of associated living between the people who form the society. For him the ideals of liberty, equality and fraternity are a binding force which makes democracy sustainable and viable.

Many would believe that Ambedkar was familiarized with these ideals from his readings of the French revolution. However, Ambedkar found these ideals in the teachings of Buddha and the practice of Buddhism. He found Buddhism to be a democratic religion and thus embraced Buddhism in 1956. He looked at Buddhism not only as a way for his spiritual wellbeing but also a political tool to counter the hegemony of brahminical Hinduism. Buddhism was a space for acceptance, equality and humanism according to Ambedkar.

Prakash Ambedkar, the Chair of the lecture in his concluding remarks, pointed out that Indian society is not homogenous and how Ambedkar through interaction and not revolution sought to bring the different groups constituting India together. To build a nation, Ambedkar focused on the points of convergence amidst all the heterogeneity. At the same time he worked towards caste liberty and sociasl democracy. Prakash Ambedkar reteriated that Ambedkar believed that vedic Hinduism was a challenge to democracy and contradictory to liberty and individual thought. The teaching of Hindu saints is what finds larger acceptance in the liberal ethos of the masses even today.

The memorial lecture was timely given the appropriation of Ambedkar from different quarters and distortion of his thoughts. Ambedkar still inspires social struggles for equality and democracy. The speaker, Christophe Jaffrelot before beginning his lecture rightly pointed out that Dr. Asghar Ali Engineer, in whose memory this lecture was organized likewise worked for rights of the marginalized and proved to be an inspiration to so many through his writings, chronicling of communal violence, recommendations to mitigate the same and through his social as well as personal struggles. The speaker enthralled the audience and gave an insightful fresh perspective on Ambedkar. In spite of scrambling for space and standing for most of the evening, the audience and the organizers considered the interaction very enriching and evening well spent! 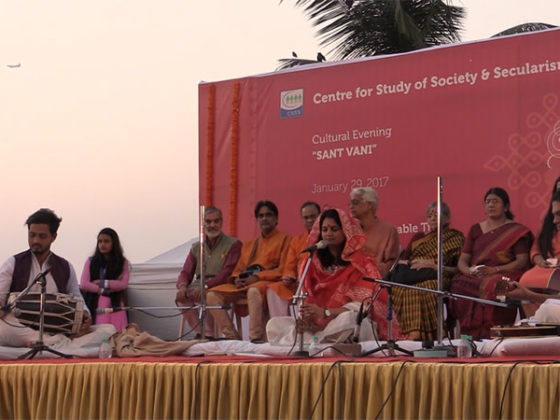