Indians, as indeed citizens of all countries, venerate their armies as apolitical, professional, virtuous and disciplined force; and army men as fountainhead of virtues like patriotism and honesty, even if there a few dishonourable exception to this rule within the force. The land grab in AP by two army officials, Adarsh coop society were more of exceptions to the rule, where some individuals became greedy. The Tehelka sting operation and expose with reporters posing as arms dealers also did not dent our faith in the honesty and patriotism of our soldiers. We continue to believe that soldiers overcome their normal human tendencies like selfishness. We believe that training to fire a gun is also simultaneously training to overcome one’s selfish nature. We believe that the only enemy the soldiers are trained to fight are foreign armies and that it is essential to fight the “enemy” and that soldiers undertake to fight the battles only to preserve the integrity of our borders and secure the citizens. Middle class Indians despise politicians as mostly less educated, having by and large rural origins, corrupt and a selfish lot. Politicians are less respected for another reason also – they distribute sops like subsidized food grains, TV sets and laptops to undeserving people in order to get themselves elected. Politicians are barely tolerated as necessary evil.

Retd. Army Chief, Gen. V K Singh’s revelations should challenge all the above beliefs, mainly of middle class Indians. Gen. V K Singh now says that army has been handing money to ministers in the state of J & K. Indian Express report alleges that there is a report of Army Intelligence Unit money was to topple the J&K Govt. However, the General clarifies that the same was paid to the ministers to promote stability and to win hearts and minds of the people. Several other retd. army officers have also been quoted by various press reports stating that the amounts utilized “to win the hearts and minds of people” were under the Sadbhavana scheme and was directly spent by the army on various welfare schemes.  Lt. Gen Arjun Ray, commander of 14 Corps in Ladakh in his book “Peace is Everybody’s Business: Strategy for Conflict Prevention” gives account of the Sadbhavna scheme implemented by him. Under his command, Sadbhavana was a civic action helping the citizens with humanitarian assistance and fraternization representing human face of the military. According to the Ray, the key was in having bottom-up approach restore human dignity and in making people stakeholders in their destiny. Therefore, from the media one gathers that Sadbhavana for “the winning hearts and minds” was something different and allegedly paying money to the ministers in J&K was something different. When Gen. V K Singh being Ex-Chief of Staff of Army makes a statement that the army was paying the ministers in J & K, it cannot be dismissed lightly. There are no motives that can be attributed to him. What can he gain by making an incorrect statement? The statement also cannot be dismissed as ill informed one as the Ex-Chief should know the facts. Only a probe can determine who was paid and how much.

The leaders associated with the BJP and the General himself is exclusively focusing on the factum of leak and calling upon to probe. The BJP leaders like Mahesh Jethmalani are not willing to comment on the content of the Military intelligence report. The National Conference on the other hand demands that the allegations and the contents of the military intelligence must be probed to bring full facts in the public domain. The General wants a white paper on Technical Services Division and the honourable role played by it. The whole thing is in the public domain thanks to the fact of BJP’s PM candidate’s eagerness to seek endorsement for his candidature from the General and to not only garner votes of ex-servicemen, but also influence the Military with its political agenda. Be as it may, the process persuaded the General to share the information in public regarding military dabbling into political processes in the country.

Roles that Military can play:

During ancient period, we had tribal warfare when every member of the tribe was obliged to take part in the war or conflict. However, with social progress, and with production of surplus value, society could afford trained and semi-trained soldiers who alone were obliged to fight during wars. There were minimum regular soldiers to guard the state treasury, arms and the palace. However, large fighting armies would be mobilized only during wars by forging alliances. The regular standing armies that we know are not ancient organizations.

The modern standing armies play three types of roles – 1) guarding the borders against external threats; 2) engaged in internal conflict and disturbances within the borders and 3) be an occupation army. There is a fourth role that army is often called upon to play – that of service and relief during disasters. These roles are not mutually exclusive. Different sections of population may witness or perceive different roles of the army.

Various sections of people in India have perceived Indian army in all the four roles at different times. During war with Pakistan and China, Indian army has been guarding and defending the borders, sometimes even very adverse conditions. During disasters like the recent cloud burst in Uttarakhand, earth quake in Gujarat and Maharashtra, tsunami, frequent floods too soldiers have been called upon rescue people trapped in disasters. Indian army has been deployed during communal riots. Minorities often demand quick deployment of the army as police are seen playing partisan role. Various fact finding reports have brought out that police often use disproportionate force against the minorities. Minorities first become casualties of rioting mobs and are at the receiving end of the police bullets. Police are often known to participate in the looting of minority business establishments during the riots. Politicians who plan the riots and benefit politically from them try to delay the deployment of army as much as possible during the riots. However, army once deployed, immediately brings down the levels of violence. Under military protection, the minorities are rescued and shifted to safer places. Authorities in Gujarat in 2002 and in Delhi in 1984 delayed deployment of army by nearly 72 hours and meanwhile both the states witnessed dance of death.

Protection of AFSPA to the soldiers

However, the increasing engagement of the army in internal conflicts, Viz. J &K, Nagaland and Manipur and their long deployment, perceived to be near permanent, draws the armed forced into local politics. A large section of the people of Nagaland, Manipur and J & K perceive the army as violators of human rights. To curb popular armed liberation movements, the army too has to take casualties and that triggers off urge to use brutal force, often in violation of human rights not only of the armed fighters but also of unarmed members of the community. The use of force is often guided by a sense of revenge. Various methods are used to punish the community as the armed fighters become untraceable. Generally, the military objective behind punishing the community for the crimes of the armed fighters is to put pressure on the fighters to give up their fight. Sexual assault on women of the community has been used as a weapon in Manipur as well as J & K state. Women in Manipur demonstrated naked in front of the Military office daring soldiers to rape them all. Disappearances of large numbers of youth, massacre in Chhattisingpura, dragging youth, killing them in fake encounters to claim medals and prize money are some other methods deployed. Discoveries of mass graves in J & K are evidence of not only violation of human rights but also impunity enjoyed by the soldiers. The soldiers are not made accountable under the pretext that it would demoralize the army. A few cases which were handed over to CBI for investigation resulted in gathering of credible evidence against the guilty officials of the army. However, the Army is taking cover of Armed Forces Special Powers Act (AFSPA) to protect the guilty officials. The protection of AFSPA encourages rogue soldiers to care little for the human rights of the community and violate law with impunity. When the community and their political representatives find themselves powerless to bring the rogue soldiers to justice for their violations, the army is perceived by them as occupation army and resistance to the occupation army, however weak, remains the only option and makes the armed fighters popular heroes.

The political class errs in two regards. One – not pursuing and exploring political solutions to the problems. Two – clouding all the affairs pertaining to military in mystery. To keep important military matters like the strategies etc. secret cannot be disputed. But to shroud every aspect of the army in secrecy leads to a situation where the top brass of the military enjoy unaccountable and near absolute power. In order to justify the near absolute power to the top brass of military, a halo of veneration is created using media. Tehelka which carried out sting operation to expose corruption among the military was hounded. Media in general avoids putting military affairs through its critical lense.

Frenzy of jingoistic nationalism whipped up by parties like the BJP also seeks to venerate the military. Jingoistic nationalism is expansionist in nature and relies on discourse of hard military power and dominance rather than language of justice and inclusion. Shushma Swaraj wanted heads of ten Pakistani soldiers for every Indian soldier killed on the border. This makes the nation over dependent on military rather than soft power of dialogue and persuasion to resolve conflicts. Over dependence on military makes the nation invest more on its defense forces at the cost of welfare measures like education and health of citizens and development of infrastructure. The jingoistic nationalism for this precise reason attracts the military. Modi’s belligerent politics needs military and vice versa. Hence, seeing retd. army men on Modi’s platform is not surprising, but a cause of worry. For it encourages military to dabble in politics. There is no democracy if army men fund politicians with a veil of secrecy and unaccountability. Funding politicians will not win hearts and minds of people, and in any case it is not the job of military to win hearts and minds of people. That is the job of politicians by finding suitable political solutions to the problems through dialogue and inclusion. The politician-army nexus is less likely to clean up politics and more likely to corrupt army men. Acts like AFSPA should be immediately repealed to bring more respect for human rights which will strengthen democracy in the country. 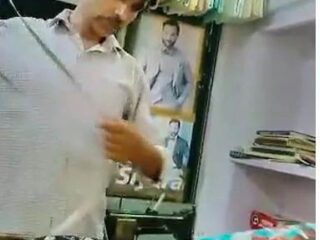