Millions of Indians are rooting for Indian athletes to shine at the Tokyo Olympics and bring home the elusive galore of medals. While some of the Indian athletes have done us proud by winning at this prestigious international event, some people instead of celebrating this victory are busy in finding out the caste and religious identities of the athletes. According to reports, lovlina Borgohain’s religion and P.V. Sindhu’s caste were the most searched questions on the internet after they did us proud at the Olympics. This is not surprising given the deepening of communal identities in India. In fact, it is largely a reflection of the deepening fault lines in India, a process ably accelerated by the present regime which gives the colour of communalism to the most mundane and also important issues of governance. The Constitution of India states it is a secular democracy- the state will have no official religion. However, the actions and policies of the ruling regime makes it evident that though de-jure India is a secular democracy, but in reality, the regime gives a communal spurn to every crucial issue of governance which on one hand takes the attention off from governance deficit or need of accountability from the government and secondly furthers the ideological agenda which we will understand with some examples.

Let us begin with the example of Assam which is in news for the raging conflict with its neighboring state, Mizoram. The socio-political landscape of North East India and particularly, Assam is complex given the web of identities- religious, ethnic, linguistic, historical context of migration, negotiations and (re) drawing of boundaries and issues of citizenship. Assam in the last few years has been in political turmoil with – million of its citizens facing the uncertain prospect of statelessness. The policy of National Register of Citizenship (NRC) stemmed from the politics of hatred and exclusion against “Bangladeshi migrants” which on ground translated into targeting of Bengali speaking Hindus and Muslims in general, leaving the Assamese society fractured and volatile. The Assam state election results which gave a thumping win to the incumbent ruling party was amidst polarization engineered on intense communal narratives- the hysteria based on “outsiders”, “miyas”, “immigrants” etc.

In this context, the insinuation of Assam CM vis-à-vis the border dispute with Mizoram where he is attributing the conflict to difference in religious identities is discerning. Sarma said “rumours” about Assam targeting beef supply to the rest of the region might have led to resentment in a predominantly Christian state like Mizoram. This is false given the history of conflicts between the two states. Assam and Mizoram are embroiled in a border conflict which had claimed five lives in the last few days and threatens the peace of the region. The conflict between the two states is historical and dates back when Mizoram then referred to as Lushai Hills was carved out of Assam. The dispute stems from a notification of 1875 that differentiated the Lushai Hills from the plains of Cachar, and another of 1933, that demarcates a boundary between the Lushai Hills and Manipur. Mizoram believes the boundary should be demarcated on the basis of the 1875 notification, which is derived from the Bengal Eastern Frontier Regulation (BEFR) Act, 1873 when the Mizos were consulted. Assam Chief Minister, Himanta Biswa Sarma, of whom a statesman like solution was expected keeping in mind the complexities and historicity of the conflict, instead blamed Mizoram for the flare up of the conflict and transportation of cows from Assam to the state. Assam recently passed legislation prohibiting slaughter of cow. He suggested that the border dispute is triggered due to the possibility of restricted beef supply to Mizoram, which is a Christian majority state.  He gave a purely political conflict a communal tint which doesn’t help the sparring states come to any viable solution.

The Bill in question itself is the manifestation of the communal propaganda. Riding on the politics of beef and the sentiments it can fan including a series of incidents of mob lynching, Sarma proposed the Assam Cattle Preservation Bill, 2021, which bars sale and purchase of beef or beef products in areas “predominantly inhabited by Hindu, Jain, Sikh and other non-beef-eating communities”, or “within a radius of 5 km” of any temple or sattra (Vaishnavite monasteries). The Bill seeks to prohibit transport of cattle throughout Assam to other states via Assam. This Bill is bound to polarize the Assamese society further by deepening identities based on consumption of beef- creating binaries of beef eating population and non beef eating population. Another implication of the Bill is also shortage of supply of beef to other states of Northeast where beef is consumed since Assam geographically connects the Northeast region to the rest of India. The Bill is interfering into the cultural landscape of region dictating even food patterns. Thus, this Bill seeks to wrench a deeper divide in the region through the narrative of beef and the right-wing constructed communal identities associated with beef. One of the results of such policies is creation of communal geographies where areas are demarcated for legal purposes based on religion of residents residing. Experience from other parts of India has demonstrated that such narratives and policies play a crucial role in the process of spatial segregation and ghettoization. It is no surprise that in the state assembly polls in 2021, Hindu dominated areas voted for the BJP and Muslim dominated areas for other political parties. This polarization is paying electoral dividends for the ruling regime and it is in their interest to deepen this polarization. Explaining the inter-relation between demography and electoral dividends in the Assam state elections in 2021, Verniers Gilles states, “the areas where the Congress coalition perform well are the areas where the state’s Muslim population is concentrated. The higher the share of Hindus, the more votes for the BJP”(Verniers, Basim-u-Nissa, Kumar, & Agarwal, 2021).

The above are not isolated examples of the regime in keeping the cauldron of communalism boiling which is leading to simmering communal tensions in this volatile state. CM Sarma has directly targeted the Muslim community while rationalizing the new law on two child policy of the state that incentivises government jobs and promotion based on the size of the family apart from barring those with more than two children from contesting the panchayat polls. “We can solve numerous social ills in Assam, if immigrant Muslim community adopts decent family planning norms. This will be my appeal to them”, said Sarma while “appealing” to the community. While demography experts cite statistics from the NFHS and census to show that annual growth rate of the Muslim population has dropped from 1.77 per cent during 1991-2001 to 1.57 per cent during 2001-2011 (Saha, 2021), Sarma still took a jab at the Muslim community to perpetuate the myth that Muslims in Assam are responsible for social ills, making the entire state insecure. Ironically, Sarma while making such serious allegations cited no data or evidence. Sarma sought to normalize a myth to further polarize the community along religious lines citing rise in population which again is a matter of governance and co-related to overall development including education and empowerment of women.

Targeting of vulnerable communities and making religion a primary lens to view all issues is not happening in Assam alone. This is common in rest of India too. For instance, in the peak of the Covid pandemic, where the second deadly wave claimed hundreds of lives, Tejasvi Surya instead of grappling with the scarcity of beds and oxygen in hospitals, was busy accusing the Muslims for scam in the Bengaluru municipal corporation’s bed allotment system for Covid patients. The basis of his allegation was the presence of 17 Muslims in the Covid war room! Surya along with two BJP MLAs “raided” the war room. Basavanagudi MLA Subramanya is seen questioning a staff member, “Have you been recruited for any madrasa or for the corporation? We are facing flak from the public for your misdeeds. We have enough information on who are blocking beds and how much money such people are collecting” (Arakal, 2021). Bangalore South BJP MP Tejasvi Surya’s YouTube account, he is heard reading out names of 17 people with Muslim names. He obviously doesn’t disclose in the video that the war room has 205 employees out of which only 17 are Muslims! This kind of religious profiling that Surya exhibited is yet another instance in blaming and scapegoating of minorities. The pandemic is grabbed as an opportunity to manufacture and give impetus to derogatory narratives seeking to label Muslims as “terrorists” and indulging in “corona jihad” as was evident in the criminalizing of the Tablighi Jamaat last year. Tejasvi Surya communalised a public health emergency by looking at the issue from the lens of religious identity.

The idea of India and composite nationalism emerging from the freedom struggle of India was based on inclusion and secularism. The founding leaders of India envisaged that religion would not be an influencing factor in governance or public policy- state will have no religion though there was freedom and space to practice religion and equal treatment to all religions. State policies so to say were religion-neutral. There is a stark shift from this approach by the ruling regime. One can argue that communal identities existed even before the current regime came to power. True as it may be, there was at least public acknowledgement and avowed commitment to the secular nature of the state. But this is rapidly changing where the ruling regime is overtly and unapologetically subverting the secular character of the country reflecting in state policies. Officials sworn to the Constitution are seeking to polarize by exploiting religious identities and referring to religion while drawing up policies and laws.

In this process, the regime is manufacturing a meta-narrative of Islamophobia- of how Muslims are a threat to the country and how there is a need to formulate laws to grapple with this threat. The laws are used to relegate the minorities to second class citizens and completely destroy their image and contribution as equal citizens who have equally contributed to the development of the country. Islamophobic narrative is used to legitimize the proposed policies which most of the times are passed in the legislature owing to brute majority in terms of numbers without sufficient discussion or debates. Even the thinnest of veil of secularism is brazenly lifted by this regime to expose a deeply fragmented society on the lines of religion. 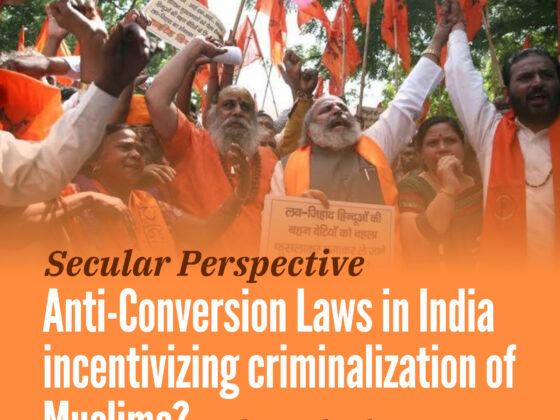