The Constitution of India guarantees right to freedom of religion to its citizens. Article 25 says, “Subject to public order, morality and health and to the other provisions of this Part, all persons are equally entitled to freedom of conscience and the right freely to profess, practice and propagate religion”. However, despite this Constitutional right, there have been arrests of persons alleging that they have been causing mass conversions and running “biggest conversion syndicate”. For the purpose of busting these “syndicates” and “rackets”, the Anti Terrorist Squads (ATS) has been engaged in UP and it has made more than 15 arrests so far, the latest being Maulana Kaleem Siddiqui, an Islamic scholar from Muzzaffarnagar. In some cases, the stringent National Security Act is invoked. While the government backed narrative is creating an impression that many conversions are forcibly taking place and almost likening it to organized crime, it is interesting that no data or number is given by the authorities. Where are the cases of conversions? Are there so many cases of conversions that the state has launched a hunt for the same? Is it a crime in the first place to convert or cause conversions?

The ruling dispensation has made exaggerated claims to a point of hysteria- claiming mass conversions or large numbers of conversions. The states of Madhya Pradesh, Uttar Pradesh, Karnataka, Gujarat etc have recently passed anti-conversion bills and justified these laws by whipping up anti-conversion sentiments and allegations of rampant conversions. For instance, the following statements.  “The issue (of religious conversions) has come to the government’s notice. Converting people from one religion to another by inducing them is a punishable offence. We will keep vigil on such activities. There is a wide network working on religious conversions across the country and we will soon bring an anti-conversion bill to rein them in”, said Home Minister of Karnataka, Araga Jnanendra (Times of India , 2021). Madhya Pradesh minister Usha Thakur, alleged that Christian missionaries were doing religious conversions under the pretext of providing education or medical treatment. Thakur stated that the government was building primary health centres so that people don’t have to go to missionaries for treatment. Invoking MP’s anti-conversion law, she said that such forced conversions by missionaries will not be tolerated in the state (Karthikeyan, 2021).

Thus, a number of states in India have passed laws in effect banning conversions by putting in place stringent restrictions. Conversions are increasingly being criminalized in different forms especially inter-faith marriages. Ironically, despite shocking stories of arbitrary arrests alleging forcible conversions, the government has been unable to furnish any details of the cases of conversions. Thus, the author has monitored media reports to understand if forcible conversions are taking place on a mass level. The cases in the media paint a rather different picture which contradicts the narrative and arguments of the ruling dispensation. The media reports point towards hardly any cases of mass conversions of Hindus into Islam or Hindus into Christianity. In fact there are reports of how the Hindu supremacist organizations are using this bogey of conversion to target- beating up and intimidating Muslim and Christian religious leaders and disrupting religious assemblies without any basis. Churches and pastors are increasingly coming under assaults by the Hindu supremacists according to media reports. Below we are listing down some of the cases[1].

On 5th September, 2021, a Christian priest was beaten up by a right-wing mob inside a police station in Raipur over allegations of forced religious conversions. A mob attacked the priest.  The pastor was subjected to physical assault. A video of the incident shows some members hitting the priest with slippers and shoes (Dwary, 2021).

On 8th April, 2021, a Christian priest was beaten by a group of Hindu extremists in Tichkiya, in the central state of Madhya Pradesh. Pentacostal pastor, named Bharat, and belonging to the Bhilala tribe, had gathered in prayer with three other believers in a house when Hindu supremacists broke in. They accused the pastor of “enticing” the tribal population with the Christian faith. After a heated argument, the extremists beat Rev. Bharat and vandalized the prayer center (Carvalho, AsiaNews.it, 2021).

In another incident, Hindu activists in the state of Chhattisgarh disrupted a prayer service and threatened two Christian pastors in the span of three days for alleged religious conversions. In the first incident on July 4, Pastor Firoz Bagh was conducting a prayer service at his house in Raipur, the state capital, when 30-40 Hindus surrounded the house and started shouting anti-Christian slogans. Police took the pastor into custody but released him after a few hours after the intervention of church leaders. On July 7, Pastor Ramesh Manikpur of Sarora Gogaon was resting at his house in the evening when a Hindu group wrote a slogan hailing Hindu gods on his boundary wall. The priests complain of routine harassment by Hindutva groups who accuse them of conversions (Minj, 2021).

In Adnadhi village of Madhya Pradesh, a mob of about 250 people, led by the village head, attacked the group of Christians because they refused to give up following Christianity. Four people sustained serious internal injuries and had to be hospitalized. According to witness accounts, the village chief summoned the Christians to a place where they were attacked by a mob that had already assembled. The village chief asked the group of Christians to either give up their faith or leave the village. When the group refused to give up Christianity, they were attacked with stones. The Christians in the village also accused Hindu supremacists of breaking into their homes during prayer meetings (Carvalho, 2021).

In Jhabua, Madhya Pradesh, the aggressive Vishwa Hindu Parishad (VHP) has threatened to demolish churches in the district. The VHP had approached authorities with allegations of the churches are running a “conversion racket” in Jhabua district. They also alleged that the churches are illegal structures. Consequently, summons from the tehsildar (collector) of Jhabua were sent out calling several priests to produce the documents of their appointments and conversions under them. This along with the persistent threats from the VHP has created an atmosphere of fear in the Christian community. The Bishop has sought help from the President of India (Ara, 2021).

In early September 2021, vigilantes from Hindu Jagaran Vedike barged into a Church in Kukkandur village in Udupi district in Karnataka alleging that the church authorities assembled more than 35 Hindus there to carry out religious conversions. It was alleged that the activists misbehaved with women after barging inside the church. The police have booked the HJV activists along with Benedict, the church pastor for allegedly carrying out conversions and holding religious meetings without permission (Deccan Herald, 2021).

A group of over 100 people allegedly beat up a 25-year-old pastor after barging into his house at a remote village in Chhattisgarh’s Kabirdham district late August, 2021, during which they raised slogans against religious conversion. The mob also vandalized his property and manhandled his family members before fleeing from the spot. They mob damaged articles of worship and household items, and tore scriptures (The New Indian Express, 2021).

In July, 2021, about 25 Hindu radicals stormed a prayer meeting in Gangapur town, Uttar Pradesh, accusing those present of forcibly converting Hindus to Christianity. In addition, 9 Christians were also arrested in violation of the anti-conversion law in UP taking the toll of the arrests to 30 in the month of July alone (AsiaNews. it, 2021).

A place of worship was damaged using explosives and its priest and a devotee were thrashed with sticks allegedly by two dozen masked people at Jawad tehsil in Madhya Pradesh’s Neemuch district in early October, 2021. The attackers left behind a pamphlet claiming the shrine was involved in converting Hindus to Islam. The wounded priest, writhing in pain with one of his legs bandaged, said he was tied, bundled, and bashed by masked men (Indian Express, 2021).

The above are the examples of how priests, religious assemblies, prayers and places of worships are attacked routinely by Hindu supremacist organizations hinting at a certain level of impunity they enjoy while raising the false bogey of conversions. The police and administration too takes little or no action against the perpetrators. In fact it is seen charging the innocent priests with charges under the draconian anti-conversion laws. While attacking the priests and prayers is one modus operandi of the vigilante groups using the law as a tool, targeting inter-faith couples is another modus operandi. And these cases have been widely covered by the media. Some of the examples are discussed below.

In UP, a Special Investigation Team (SIT) was constituted to investigate into the cases where Hindu women were “lured” by Muslim men into relationships and marriages. In July, 2021, the members of Karni Sena stopped a wedding of an inter-faith couple at the Ballia district court alleging forceful conversion of the Hindu woman. The workers of the Hindutva outfit then allegedly forced the woman to go to Kotwali police station, where police officers intervened and handed over the 18-year-old woman to her parents, until she gave a statement in court (Rehman, 2021). Similarly, in Vadodara, Gujarat, a woman went to complain about domestic violence against her husband but the police filed an FIR against her husband, Sameer Qureshi accusing him of forcefully converting her to Islam. The law has been targeting Muslim youth and not allowing Hindu women to marry or convert out of their own will. These are only two of the many similar cases.

What does the above say about the scenario of conversions and the politics surrounding it? The bogey of conversions legitimized by anti-conversion laws in some of states in India is used as a weapon to engage in a witch hunt against the Christians and Muslims. They are routinely intimidated by the Hindu supremacists and criminalized by the state. This deliberate criminalization has strengthened the carefully constructed narrative that Muslims and Christians have been forcefully converting Hindus in large numbers without furnishing any data on these alleged conversions. Such laws, subsequent criminalization and ideological propaganda are resulting into blatant violation of freedom of religion in India. And the victims are beaten into submission and helplessness without any recourse to justice in this dystopian state of what remains of the secular India. 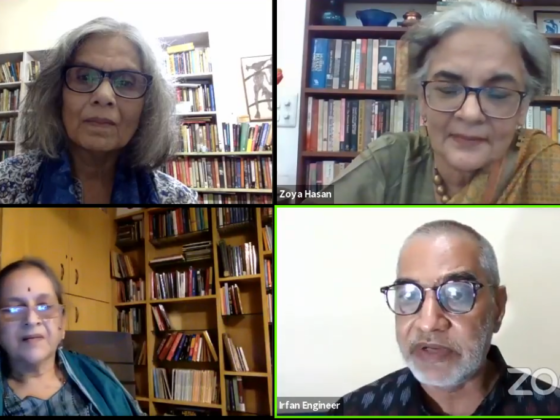